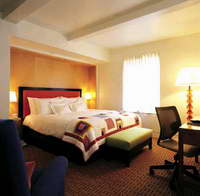 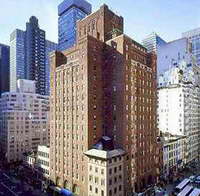 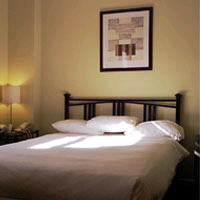 Hotel Astor On The Park ***

New York is also the site of the only extra-territorial enclave within the boundaries of the U.S., the United Nations compound on Manhattan's East River.

The southern tip of New York State—New York City, its suburbs including Long Island, and the southern portion of the Hudson Valley—can be considered to form the central core of a "megalopolis," a super-city stretching from the northern suburbs of Boston to the southern suburbs of Washington D.C. and therefore occasionally called "BosWash". First described by Jean Gottmann in 1961 as a new phenomenon in the history of world urbanization, the megalopolis is characterized by a coalescence of previous already-large cities of the Eastern Seaboard: a heavy specialization on tertiary activity related to government, trade, law, education, finance, publishing and control of economic activity; plus a growth pattern not so much of more population and more area as more intensive use of already existing urbanized area and ever more sophisticated links from one specialty to another. Several other groups of megalopolis-type super-cities exist in the world, but that centered around New York City was the first described and still is the best example.

While the state is best known for New York City's urban atmosphere, especially Manhattan's skyscrapers, most of the state is in fact dominated by farms, forests, rivers, mountains, and lakes. New York's Adirondack State Park is larger than any U.S. National Park outside of Alaska. Niagara Falls, on the Niagara River as it flows from Lake Erie to Lake Ontario, is a popular attraction. The Hudson River begins with Lake Tear of the Clouds and flows south through the eastern part of the state without draining Lakes George or Champlain. Lake George empties at its north end into Lake Champlain, whose northern end extends into Canada, where it drains into the Richelieu and then the St Lawrence Rivers. Four of New York City's five boroughs are on the three islands at the mouth of the Hudson River: Manhattan Island, Staten Island, and Long Island.

"Upstate" is a common term for New York State counties north of suburban Westchester and Rockland counties. Upstate New York typically includes the Catskill and Adirondack Mountains, the Shawangunk Ridge, the Finger Lakes and the Great Lakes in the west; and Lake Champlain, Lake George, and Oneida Lake in the northeast; and rivers such as the Delaware, Genesee, Hudson, Mohawk, and Susquehanna. The highest elevation in New York is Mount Marcy in the Adirondacks.