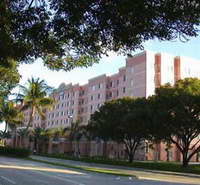 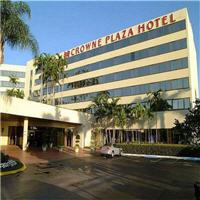 Geographical position
Florida is situated mostly on a large peninsula between the Gulf of Mexico, the Atlantic Ocean, and the Straits of Florida. It extends to the northwest into a panhandle, extending along the northern Gulf of Mexico. It is bordered on the north by the states of Georgia and Alabama, and on the west, at the end of the panhandle, by Alabama. It is near the countries of the Caribbean, particularly the Bahamas and Cuba.

At 345 feet (105 m) above mean sea level, Britton Hill is the highest point in Florida and the lowest highpoint of any U.S. state. Contrary to popular belief, however, Florida is not entirely "flat." Some places, such as Clearwater, feature vistas that rise 50 to 100 feet (15–30 m) above the water. Much of the interior of Florida, typically 25 miles (40 km) or more away from the coastline, features rolling hills with elevations ranging from 100 to 250 feet (30–76 m) in many locations. Lake County holds the highest point of peninsular Florida, Sugarloaf Mountain, at 312 feet (95 m).