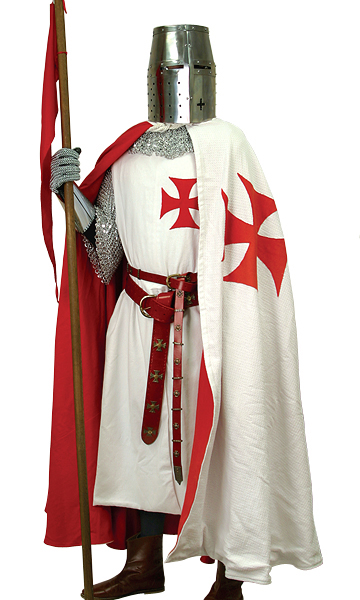 In stock
Reconfirm the price with seller
Imperial Weapons, Company
USA, Jackson
(View map)
+1(7
Display phones
Call
Products of other enterprises
Description
At the council of Troys in 1128, the Templar Order was confirmed by Pope Honorius II. The Knights received the white vestment as a symbol of purity of their life, to which Pope Eugenius added the red cross in 1146.
King Baldwin II, the King of Jerusalem, installed the Order in a part of the Palace of Jerusalem believed to be Solomon's Temple, from which they took the name of Knights of the Temple or Templars. The order's battle honors in the defense of the Holy Land are now legendary, while the accounts of their missing accumulated wealth are still a mystery. Shown here with our Templar Cape, this heavy cotton sleeveless tunic has been dyed a bright white. The Order's Maltese styled red cross has been appliqued over the heart, while a full linen lining has been sewn on the interior. Dry clean only. Choose S/M or L/XL.
Contact the seller
Historical Clothing Templar Tunic

We recommend to see
Theatrical costumes
Send inquiry
Buy
Contact supplier
Your question has been sent successfully
Consultants of the shop typically answer questions during the day.