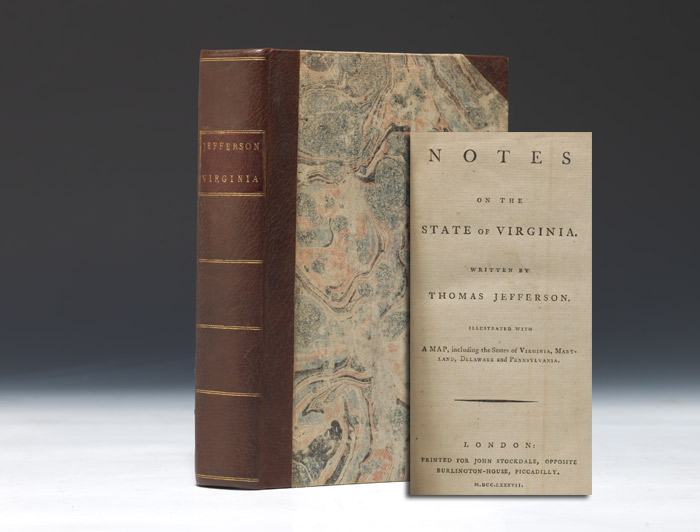 "The Notes on Virginia laid the foundations of Jefferson's high contemporary reputation as a universal scholar and of his present fame as a pioneer American scientist… this extraordinarily informing and generally interesting book may still be consulted with profit about the geography and productions, the social and political life, of 18th-century Virginia. With ardent patriotism as well as zeal for truth Jefferson combated the theories of Buffon and Raynal in regard to the degeneracy of animal and intellectual life in America, and he manifested great optimism in regard to the future of the country, but he included strictures on slavery and the government of Virginia" (DAB). Written in the form of answers to questions about Virginia, the breadth of Jefferson's intellect is evident in his comments on Virginia's geography and economy, its social and political traditions, and his prescription for the improvement of the state and the country. The book was largely written in 1781 and first published in Paris in a privately printed edition of 200 copies, many inscribed by the author. A French edition translated by the Abbé André Morellet followed in 1786. This first and only English edition of 1000 copies includes the important folding map by Jefferson engraved by Neele for the French edition of 1786. The impressions of the map differ from those of the French by the imprint in the lower left corner reading: "Published as the Act directs July 13, 1787 by John Stockdale in Piccadilly London," by being hand-colored in outline in accordance with a sample sent by Jefferson, and by being on a single unjoined sheet. Also with a folding table of Indian tribes. Howes J78. Sabin 35895. Vail 760. Sowerby IV: 301-30. Adams, 57. Verner, 1787. Rensselaer Westerlo's owner signature, dated 1794, on the front flyleaf. Westerlo was the grandson of Philip Livingston (1716-78), a signer of the Declaration of Independence). Westerlo, a Columbia graduate and Federalist, served as a Representative from New York to the Fifteenth Congress (1817-19). He did not stand for a second term, resumed the practice of law and died in Albany, New York, on April 18, 1851. The Livingston family was one of the most powerful in early federal America, with extensive business interests, owning large sections of New York State. They were usually Federalists, but Westerlo's second cousin was an exception: Henry Brockholst Livingston (1757-1823) was a lawyer and strong supporter of Thomas Jefferson. In 1802 he became a judge of the New York supreme court and in 1806, by appointment of Thomas Jefferson, associate justice of the U.S. Supreme Court. The present work may well have been a gift to Westerlo from his elder relation taking an interest in education of a promising youngster displaying an interest in the law as a career.
Contact the seller
Desirable First English Edition Of Jefferson’s Notes On Virginia, With Original Map

We recommend to see
Books second-hand
Books and albums
Send inquiry
Buy
Contact supplier
Your question has been sent successfully
Consultants of the shop typically answer questions during the day.