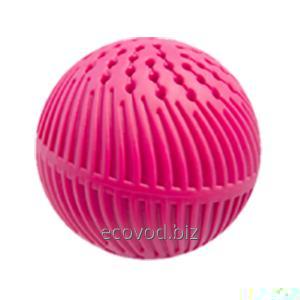 Ball for washing with SilverWashBall silver

The correct washing with SiverWashBall ball

The ball is intended for application in household washing machines, and also for a hand wash. During washing of SilverWashBall allocates ions of silver (Ag+) which effectively destroy the majority of pathogenic microorganisms in the washing machine and on fabrics. It sharply reduces risk of transfer of infections through linen and clothes, and also removes the main reasons for unpleasant smells.

Your linen after washing can smell of freshness, but do not give themselves to deceive to false feeling of purity. Refusal of high temperatures of washing and "severe" detergents of times of our grandmothers, can be dangerous to our health. Modern "soft" laundry detergents, and also low temperatures (40 degrees and less) do not destroy potentially dangerous bacteria but only wash away part of them. In one of researches it was shown that the linen after washing contains only 14% less microbes, than before washing.

Moreover, microorganisms can successfully breed and be transferred in washing machines from the infected things on pure, with each subsequent washing.

Existence of a large number of pathogenic microorganisms on the objects which are directly contacting to a body of the person ― on underwear, towels, bed linen and others is potentially dangerous.

Most often in washing machines there "live" bacteria of colibacillus, golden staphylococcus, fecal bacteria, fungi, streptococci, a sinegnoyny stick, a klebsiyella of pneumonia, a salmonella, a listeriya, some viruses are more rare ―. "Many of us are steady against such infections, but if immunity is reduced, for example at children and elderly people, it can lead to serious problems".

The German researchers proved interrelation between pollution of clothes golden staphylococcus, and developing of infections of urinary tract, and also pneumonia. It is in addition claimed that in winter time norovirus can easily extend in a family via the washing machine if high temperatures of washing are not used.

To reduce risks of infection, microbiologists recommend washings at a temperature not less than 60 °C and at least 1 time a month – at 95 °C. Or, as alternative to high-temperature washings, obligatory use of disinfectants.

Under protection of silver

Silver is known as an antibacterial preparation of a broad spectrum of activity, effective against more than 650 species of bacteria long ago (among which staphylococcus, streptococci, bacteria of dysentery, whooping cough, diphtheria, cholera, a typhoid, colibacillus, tuberculosis, a salmonella, anthrax and many others).

Ionic silver inactivates an immunodeficiency virus within three hours, however as well as viruses of flu, a SARS, herpes, the hepatitis B and C, papilomavirus, norovirus and some other. Besides silver shows the expressed bakteriostatichesky activity, suppresses reproduction of fungi, elementary, dust pincers.

Silver is unique also the fact that having high biocidal efficiency, at the same time it is absolutely harmless to the person and animals (at external application). Now preparations with silver it is actively applied as a disinfectant, at treatment of burns and wounds, skin diseases, at treatment and prevention of fungal infections.

Ball for washing with silver

When washing with SilverWashBall ball, water is sated with silver ions, in concentration, sufficient for effective destruction of pathogenic microorganisms, that provides sanitarily pure washing even in cold water. It is especially important when washing products from the delicate fabrics which are not intended for boiling, but placing great demands on sterility (such as, for example, lingerie).

Besides, the part of ions of silver gets deeply to fibers, and remains on fabrics. Everything that you erase, using SilverWashBall, gains antibacterial activity, after the first washing. Silver on fabrics can interfere with reproduction now and destroys bacteria, reducing their quantity by more than 99,9%. This ability remains when carrying clothes till 7 days, "in a case" ― till 10 weeks. And at each following washing, the natural power of ionic silver renews.

The clothes with antibacterial processing by silver, are especially recommended for personnel of hospitals, athletes, and also to people by suffering allergy, sensitive skin, diabetes, various skin diseases.

The smell inevitably appears as soon as fresh sweat which in itself has no smell begins to decay bacteria. Thanks to long antibacterial effect, washing with SilverWashBall considerably reduces formation of an unpleasant smell of clothes.

Now boiling is not required to get rid of microbes. Low temperatures of washing reduce wear of the washing machine and linen.

With SilverWashBall the clothes remain fresh longer. You can erase less often and at lower temperature. You spend on average twice less electric power, is 30% less than water and detergents.

Researches showed that without bacterial pollution the durability of fabrics increases by 10-15%. Your clothes serve longer, keeping an original form.

The ball of SilverWashBall cares for your comfort and health.

- Resource: not less than 800 washings

Guarantee of 18 months of date of sale

Send inquiry
Buy
Contact supplier
Your question has been sent successfully
Consultants of the shop typically answer questions during the day.