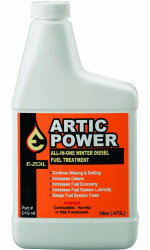 ARTIC POWER will reduce the pour point and Cold Filter Plug Point (CFPP) of diesel fuel. The pour point is the temperature which a diesel fuel will no longer flow. The CFPP is a test for evaluating a fuels ability to run in the cold. A lower CFPP provides better low temperature operability.

We recommend to see
Diesel fuel
Send inquiry
Buy
Contact supplier
Your question has been sent successfully
Consultants of the shop typically answer questions during the day.