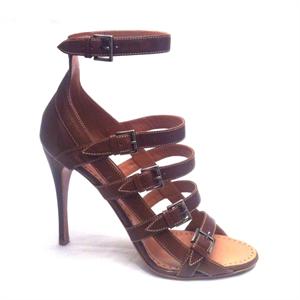 In stock
Price:
542 USD
More Than You Can Imagine, Company
USA, Houston
(View map)
+1(7
Display phones
Call
Products of other enterprises
Description
Alaia Brown Strappy Leather Sandals with Buckles & Ankle Strap. Pristine condition - no signs of wear on sole or body of shoe. One visible scuff in picture from removing a sizing sticker that removed some paint. Striking shoe with a casual/modern feel in a neutral, easy-to-wear color.

Tunisian-born designer, Azzedine Alaia, is known for his seductive, clinging clothing which garnered him the name "The King of Cling." Alaia is revered for his independence and passion for discreet luxury. His career started when he moved to Paris in 1957 at the age of 18 where he began his work in fashion design. He worked at Christian Dior, then Guy Laroche, then Thierry Mugler, later opening his first atelier in the late 1970's. His first ready-to-wear collectionwas produced in 1980. Not long after, designer Andree Putman was walking along Madison Avenue wearing one of the very first Alaia leather coats when she was stopped by a Bergdorf Goodman buyer who asked her who designed her coat. This led to his designs being sold in LA & New York. In 2000 he Alaia began a partnership with Prada, but later bought back his house and brand name from the group. To this day, however, his footwear & leather goods division continues to be developed & produced by the group. The Richemont group (Cartier, Van Cleef) currently has a stake in Alaia, but he still does not show during collections. Alaia devotees include Grace Jones, Tina Turner, Madonna, Janet Jackson, Naomi Campbell, Michelle Obama and Lady Gaga.
Contact the seller
Alaia Strappy Sandal

We recommend to see
Women's shoes
Shoes, female
Send inquiry
Buy
Contact supplier
Your question has been sent successfully
Consultants of the shop typically answer questions during the day.